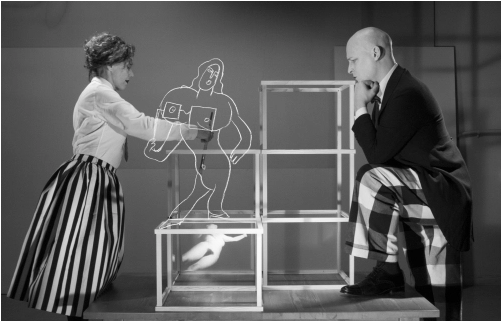 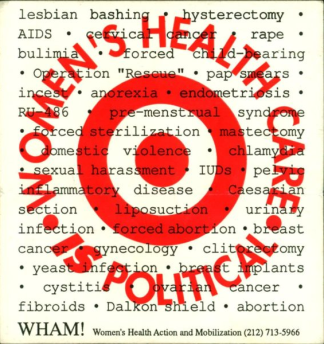 Led by Amy Herzog and Edward Miller, the Mediating the Archive research group (2014-2016) focused on how archival studies dovetail with the scholarly and artistic legacy of queer activism through visual art, film, digital media, and dance. Their work ensures such counter archives are a part of public discourse. The group was part of The Seminar on Public Engagement and Collaborative Research sponsored by the Center for the Humanities at the CUNY Graduate Center, and was made possible by the Andrew W. Mellon Foundation.

Projects included, A World Redrawn, an exhibition of work by artist Zoe Beloff, curated by Katherine Carl in the James Gallery. It presented an archival investigation of Soviet filmmaker Sergei Eisenstein, the connections between his work and German playwright Bertolt Brecht’s politically charged “epic theater,” and queer Hollywood in the lead up to World War II. Beloff’s exhibition was accompanied by a series of talks, performances, and screenings including contributions by Herzog, Miller, Stefan Brecht, Esther Leslie, Hannah Frank, Yevgeniy Fiks, Jonathan Kalb, and Ian Saville.

Mediating the Archive’s concern with cinema studies, transfeminist histories, and counter archival practices led the group to support the production of two films: Happy Birthday, Marsha!, a film by Reina Gossett and Sasha Wortzel about the life and legacy of legendary transgender artist and activist Marsha “Pay it No Mind” Johnson; and Toilet Training, a film by Tara Mateik about the persistent discrimination, harassment, and violence that people who transgress gender norms face in gender segregated bathrooms, made in collaboration with the Sylvia Rivera Law Project.

The Mediating the Archive research group deepened its impact at CUNY by empowering doctoral students to launch scholarly and public investigations of the social uses of the archive. Presidential Research Fellow Chelsea Haines curated Christian Palestinian Archive: A Project by Dor Guez in the James Gallery in spring 2016, an exhibition that presented narratives and documents of the artist’s family and their diasporic experience while also opening a public call to contribute to Guez’s ongoing collection of archival materials documenting Christian Palestinian lives and histories. In collaboration with the Cinema Studies Group at the GC, Mediating the Archive produced a conference on moving image archives that culminated in a keynote panel of international artist-archivists: Clarence Elie-Rivera, Guadalupe Rosales, and Bobbito Garcia. And finally, Digital Fellow Benjamin Haber organized a two-day conference called Queer Circuits in Archival Times in collaboration with the New York Public Library that incorporated scholarly, artistic, and activist approaches to thinking through and experimenting with networked data with a keynote and performance by theorist and artist Sandy Stone.

As part of a two-year collaboration between Mediating the Archive and Danspace Project, GC doctoral students Janet Werther and Jaime Shearn Coan organized two panel discussions as part of Danspace Project’s Platform 2016: Lost and Found. Curated by Will Rawls and Ishmael Houston-Jones, Lost & Found examines the impact of AIDS on generations of artists and seeks to recover the generation of mentors, role models, and muses who died from the disease. The Platform included a series of performances (including a restaging of the work of John Bernd, one of the earliest New York choreographers to explicitly represent gay sexuality and the disease in his work), along with workshops, conversations, screenings, and the publication of a catalog. Panels coordinated through the seminar included A Matter of Urgency and Agency: HIV/AIDS Now and Interventions in Narrativizing the AIDS Crisis.

Through the research group, Amy Herzog also organized and moderated the panel On Janus & Justice: Archives, Access, and Ethical Use of Video Evidence, which considered the use and archiving of law enforcement body cam footage and civilian video evidence.